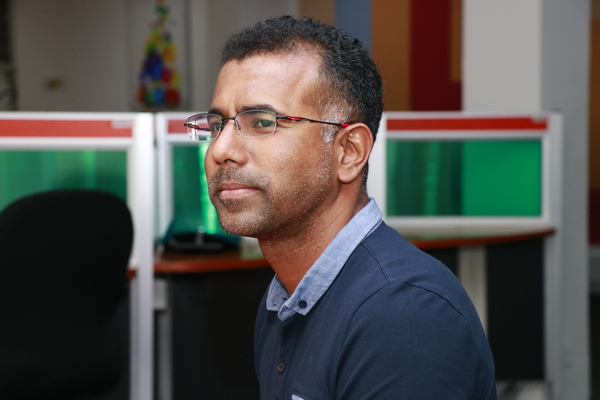 In recent years, Colombo has become a hub for start-ups with more and more being established each month. Most of these tend to cater to the local market and rarely venture into global or even regional markets. However, a few start-ups have been ambitious enough to penetrate this geographical glass ceiling and take Sri Lankan products beyond our shores.

Speaking to The Sunday Morning Business, Co-founder and Chief Medical Officer (CMO) Dr. Janaka Wickramasinghe stated that the start-up expanded to India using the Techstars Bangalore Accelerator programme, which is dedicated to supporting start-ups from around the world that address emerging market problems. The programme looks out for companies that apply technologies like AI, blockchain, AR/VR, and robotics, and provides them a readymade network of contacts from the respective industry as well as mentors from other industries.

“This is mainly to help people who come from backgrounds with poor access to healthcare; this can be due to cost, location, or many other factors. So, our primary market is the blue-collar worker and not what’s traditionally called white-collar workers.

“We go to the companies they work for and provide telemedicine coverage for these employees at a very low cost, starting at around Rs. 35 or INR 15,” said Dr. Wickramasinghe.

oDoc’s revenue is generated through the companies that subscribe with them. Once a company subscribes, its employees and their families are given unlimited consultations on demand with any of the 440 general physicians (GPs) or specialists partnered with oDoc. The app covers certain specialisations that have a high demand such as paediatrics, gynaecology, dermatology, and mental health services, and the doctors will be available for the employees within the day.

Dr. Wickramasinghe stated that the start-up looks for doctors with medical council registrations, at least five years of experience, and good bedside manners. This was also carried into their expansion to Bangalore.

While currently having around five GPs partnered with them in India, Dr. Wickramasinghe stated that once the demand picks up, oDoc will be taking in more GPs and specialists.

According to him, there are some fundamental differences between the Sri Lankan and Indian markets and the main difference – size – becomes very apparent in certain sectors.

Taking example of one of oDoc’s main clients in Sri Lanka – in the apparel sector – he stated while there are around four or five major companies in all of Sri Lanka employing a few thousand floor workers, India has around 20 or 30 similar companies around its manufacturing hubs such as Bangalore and Chennai.

“If you can establish yourself with one of these 20 or 30 players, the opportunities it presented are of a much higher degree than in Sri Lanka. This is purely because of the size of the market.”

Another big difference he had noticed was that the competition in the workforce was much higher in Sri Lanka as there wasn’t enough labour to go around. Therefore, the Sri Lankan companies had a bigger incentive to provide more benefits in order to attract more workers.

“In India, the motivation isn’t as high as in Sri Lanka; there are so many business and they have a much larger workforce. As such, it’s somewhat of a challenge when it comes to the product we are selling. But then again, these large companies sell to larger buyers in Japan and the US, so they need to maintain good working conditions and ensure workers’ rights are protected.”

“When you’re providing a product like ours, it needs to be provided in the local language. These are workers who communicate in their mother tongue, which can be one of many different languages, unlike in Sri Lanka. Here, Sinhalese, Tamil, and English can be easily covered by two or three doctors. But if you want to provide a nationwide service in India, you need to cover many more languages.

“If the doctor and patient aren’t able to communicate, you would not be able to provide the care that is required and it won’t be a pleasant experience for the patient.”

He explained that while these languages differ from region to region, there is the added complexity of migrant workers moving within these regions for work.

Despite these challenges, the oDoc app adapted itself to the Indian environment by including languages like Kannada, Telugu, and Tamil.

Dr. Wickramasinghe stated that one of the similarities they saw in the two markets was that all their clients were interested in innovation and fostering a community environment for their employees.

“Our buyers in both Sri Lanka and India care about their employees and don’t just focus on productivity, even though the availability of an on-demand doctor does reduce the amount of time an employee has to be out of work.”

However, he explained that the propensity to adopt technological solutions in tackling day-to-day problems is much higher in India; this can even be seen with street vendors who have multiple digital wallets.

“The adoption of technology in India can even be seen at the lower end of the income pyramid,” said Dr. Wickramasinghe.

This provides oDoc with more opportunities as it provides them with a much broader segment of the market that looks past high-income earners in urban centres.

According to Dr. Wickramasinghe, while there are several well-funded competitors in the telemedicine space, most of them focus on the consumer market with some competitors having gained a lot of traction.

However, he stated that only very few venture into enterprise sales and that even when they do, they mostly focus on high-end companies like IT firms that cater to white-collar workers.

“While there are well-funded competitors, competition in the B2B space and low-income market is at its infancy,” said Dr. Wickramasinghe.

Dr. Wickramasinghe stated that this doesn’t make it easy for oDoc, as they experience situations like long sales cycles in B2B sales, and without an existing customer in India, it’s difficult to convince others to subscribe.

Speaking about their move to invest, Dr. Wickramasinghe said they are currently raising the next round of funding looking at the potential of the Indian market. While having set aside funding they raised previously, he stated that oDoc India will be run on a shoestring budget, as a proof of concept, to show that they can operate, sell, and grow in India.

He also stated that the move for expansion garnered interest from some foreign angel investors as well as some regional and institutional investors.

“We do have some interest in what we are doing, and it does help having India as a potential growth market due to its size. But then again, there is interest in what we do in Sri Lanka as well, because we have yet to hit capacity. What we want to do is build our Sri Lankan operation to be self-sustaining, and not rely on venture funding.”

Dr. Wickramasinghe went on to speak about the response the app received in India, and stated that several buyers, which have several factories with around 20,000 employees, are interested.

oDoc currently closed with a farm operator which has 10 different sites, and is providing consultations to its workers. They’ve also sold to around five or six white-collar-employee companies, mainly start-ups with around 15 to 20 workers.

“Start-ups find it difficult to provide their employees with services like medical insurance and other benefits as they run on very tight budgets. As such, we present to them a very affordable way for them to provide something for their employees,” said Dr. Wickramasinghe.

As for their future, Dr. Wickramasinghe stated that they are currently focusing around Bangalore, due to it being both a start-up and manufacturing hub, and monitoring the traction and potential growth in India; all the while continuing to help oDoc Sri Lanka grow. He also stated that they have their eye on other South Asian and Southeast Asian markets, where you see a lot of growth in the manufacturing sector.

“We don’t want to ignore the Sri Lankan market, because that’s where a lot of our revenue comes from now and we want to grow that. However, that being said, we do not want try and expand too soon and lose the focus we have here or the service that we are delivering to the clients in Sri Lanka. But we always have our eye on potential markets, especially in the South Asian and Southeast Asian regions.”